“If you’re not sure what packrafting is, just look for the people in blow up bathtubs heading down some remote and dangerous looking rapids,” suggests Steve Dickinson. This issue, he introduces the rapidly growing world of packrafting… 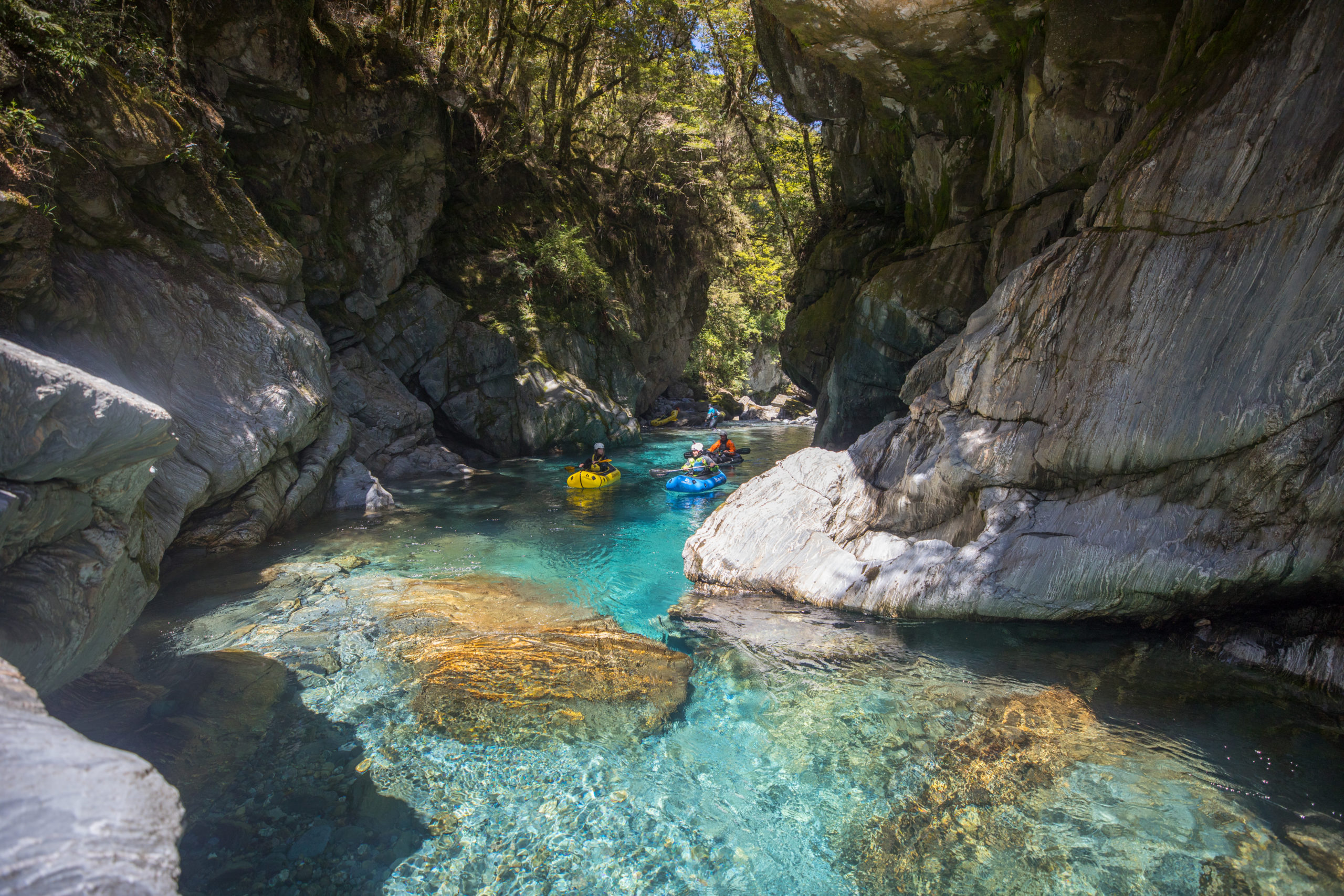 There are an ever increasing array of movies about packrafting on YouTube, and like most sports, it’s only the extreme version that ends up on the internet. But packrafting does not always need to be that intense. These unique crafts are also being used by trampers, families, fishermen and hunters across New Zealand.
Packrafts are just as they sound – lightweight, blow up rafts that fit into a pack. Well known kayakers are now running some extreme rapids and accessing some really hard to get to water because these packrafts are so portable. But it’s actually nothing new. Explorers used these type of boats in the 1950s, and then in the 80’s and 90’s they started to appear in the States. The general public and rafting companies in New Zealand have also been using single and double rafts for a while now – but modern packrafting has taken the activity to a whole new level.

One of the most experienced kayakers in New Zealand is Barny Young. I have known him for as long as I can remember. One of his claims to fame was a kayak rescue in 2013 after one of his mates that got vertically pinned in his kayak (you can find it on YouTube). Barny is now at the forefront of packrafting in New Zealand, and if you want to know the facts you ask an expert – so that’s what I did…

Steve: How long has packrafting been around in New Zealand?

Barny: Packrafting has been here for a long time, but it’s only been in recent years that it has really started to catch on and become more popular. New Zealand is the perfect playground for packrafters because we have so many backcountry trails that run alongside rivers or lakes, but we have comparatively very few roads compared to other places in the world.

Steve: When do you first recall seeing it?

Barny: I first remember seeing some packrafters bobbing down a river as I was coming down after a trip ‘safety kayaking’ for a heli rating trip on the Upper Whataroa about five years ago.

Steve: Where and when was your first pack-rafting experience?
Barny: I am a keen photographer and for many years have been using my photography as a way to help show others the spectacular places I have been lucky enough to explore with my kayak. I had always been dubious about the idea of packrafting but in 2019 the team from Kokopelli Packrafts in the USA reached out to me and asked if I would be keen to have one in exchange for creating a bit of marketing content for them. My first packrafting trip was on the Whataroa River on the West Coast of NZ and on the way up I can remember hiking past Grand Finale (A solid Class 4 rapid ) in a remote West Coast gorge and thinking there’s no way we would be paddling that in a blow up device that weighs 4kg. As soon as I put on the river and pulled my first few strokes, I was shocked at just how responsive and easy to handle the boats were. So shocked in fact that when myself and Pete arrived at Grand Finale later that afternoon, we not only paddled it but hiked back up to run it a second time – I was hooked.

Steve: As one of New Zealand’s best kayakers, what are the main differences between a standard river kayak and a packraft (apart from the portability)?
Barny: One of the big differences between packrafting and kayaking is that if you lean the wrong way in a kayak when you are learning, you will catch an edge very quickly and be in the drink so you are forced to learn how to paddle properly from the beginning. Packrafts are far more stable and forgiving but this can also lead to people becoming overconfident as it is very easy for someone without any skill to bounce down Class 1 and 2 and get away with it.

Steve: What changes have you seen in packrafting as it has evolved?
Barny: Packrafts have been around for 20 years but in the last few years the introduction of T-ZIPs (waterproof zips), which allow you to store gear inside the pontoons of your packraft, has been a game changer. This has meant people have been able to push the envelope and carry more gear and bigger loads, which helped facilitate the use of packrafts for multiday bike rafting, fishing, hunting and even ski trips.
Another game changer has been the introduction of the Nirvana self-bailing packraft around five years ago – prior to this the only packrafts available were bucket boats which filled with water when you went through a wave and required emptying. The self- bailing design allows paddlers to paddle more difficult whitewater than previously thought possible and saves people having to pull over to empty out between rapids.

Steve: Can anyone do it?
Barny: Packrafting is a very easy sport to get in to and because they are so stable, they are the perfect way to introduce the family to the water on lakes or calm/slow moving rivers. The boats are lightweight and compact, saving the need for roofracks on your vehicle to lug around a heavy kayak.
Steve: What do people need to be aware of if they choose to go packrafting?
Barny: As with any action sport, it’s really good if you can convince a couple of mates to do it with you to stay safe and progress together. Before tackling whitewater, it is really important to get hold of the correct safety gear and do a course to learn how to not only paddle but read rivers and be able to safely spot and avoid hazards.

Steve: Do you need lessons?
Barny: If you are planning on paddling whitewater you 100% need to get lessons to be able to safely navigate rivers but also take care of your mates. What many packrafters don’t realise is that packrafting, just like kayaking, is a team sport and when you get to the bottom of a rapid, you want to be able to “eddy out” (pull over in a calm pool or behind a rock), look back and make sure your mates have safely come down too. A course is where you learn these fundamental skills to keep you and your team safe.

Steve: Can you outline the types of packrafts that are on the market currently?
Barney: The bucket boat is a basic boat that is lighter and cheaper than the other options. It does not have the added protection of the whitewater deck to keep the water out when going through waves or the self-bailing holes to drain the water out mid-rapid. They are designed for lakes and sheltered/calmer rivers.
The whitewater deck is a boat with a spraydeck you wear around your waist to keep the water out. This is the warmest and driest option, but they are also heavier and bulkier. Boats with a removable whitewater deck are not as dry as a little water will come in through the zippers where the deck attaches to the boat. The beauty of the removable whitewater deck though is that you can choose between a bucket boat or a whitewater boat depending on the trip.
Self-bailer boats have holes in the floor which let water flow out of the boat. They are the lightest option and pack down the smallest.

Steve: What do you think will be the next stage of development for pack-rafting?
Barny: Packraft design has improved so much in the last few years with the advent of the self-bailer and t-zip. I believe these developments will continue as hardcore adventurers continue using packrafts to access remote backcountry for a range of outdoor pursuits.
From a whitewater perspective, my next innovation will be to try and design a boat this is easier to roll mid-rapid, enabling the paddler to take on more challenging rapids (currently, packrafts can be rolled but due to their wide tubes, it is far more challenging than on a conventional whitewater kayak).

Steve: Where’s your next packrafting adventure?
Barny: I’ve got an adventure I’d like to do that involves a steep hike up and over a mountain pass to access the headwaters of one of the previously un-paddled rivers on the West Coast. It starts in a wilderness zone so the only way to access it is via foot. Stay tuned! 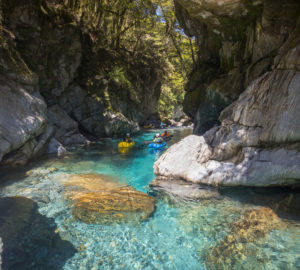