Canyoning – What’s not to love? Everything.

What is there to ‘love’ about being gift-wrapped in multiple layers of 6mm thick neoprene, a life-vest, harness, helmet, socks and boots, then being herded up a dusty track for half an hour in the blazing sun? Absolutely everything, writes adventure specialist Steve Dickinson.

We were bundled up like Michelin men, hiking up the Routeburn track just out of Glenorchy, hardly able to move due to the numerous layers of neoprene. All we could hear was the friendly chatter, and “S*** it’s hot” from various members of our group. We were getting to know one another while waddling towards our canyoning destination.

Canyon Explorers are based in Queenstown and have been exploring canyons in the region since the late 1990’s. Canyoning can be a half day or a full day experience and we were enjoying the start of the full day as we ambled up the track. 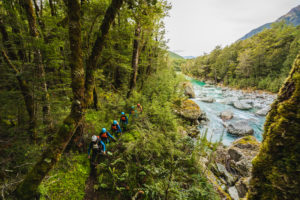 I’m not sure what it is that makes canyoning such a great ‘experience’ – maybe a mixture of everything? The setting, the adrenaline, the effort, the cold, the fear, the pushing of your own personal boundaries, or being with a group of likeminded people – all are options.

It was hard to imagine that we would need so many layers because the sun was beating down and there was not a cloud in the sky. We were wrong!

The rivers in this part of the country are quite different to those in the North Island. The rocks and boulders are icy grey in colour and although today they sat like granite sentinels in the turquoise waters, you can imagine the force of the water crashing over them when it’s raining, creating a cauldron of white water. However, today all was calm and the water was smooth and inviting. A few words of wisdom from our guides were offered: “If a rock is grey, you can stand on it; if it is green or brown, do not.”

After a brief safety and how-to talk, we were straight into it. Our first abseil into the canyon was just below the bridge and this was the last we would see of “civilisation” for the next few hours. We dropped into the most pristine pool of water and were instantly lost in the depths of the canyon.

The canyon changes your perception; you are focused on the water, the walls and what is around you. The light is different, the sounds are different, and it gives you a feeling of awe. Simply put, it just makes you feel good.

To say the water was cold would be an understatement. I think the average water temperature was around 10 degrees Celsius, which I can assure you is chilly. We meandered down the river, abseiling down sheer rocks and trying hard at first to keep our hands out of the icy water. It did not take long before we were tasked with our first rockslide and instructed to lay back and slide down the rock face into the water below. Feet first, arms folded across our chests, we dropped into the deep pool. Our heads submerged before resurfacing, our breath taken away by the frigidness of the water. It was an exhilarating experience, also known as a glacial facial.

Gasping for breath, it was only a quick swim to the rocks beyond where we lay in the sunshine, smiles wide as we rewarmed our bodies and watched the next person sliding into the pool, now very thankful for our layers of rubber! 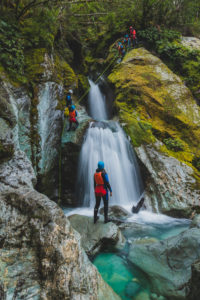 Our guides Mike and Alex were an epic team. They tied and untied safety lines and abseiling ropes, leaving as little a footprint as possible on the pristine environment. On one abseil in particular, Mike helped us abseil down into a turbulent pool known as The Cauldron. When we reached the pool, we had to release from the abseil line and plunge into the water below and swim to the edge of the waterfall where Alex was waiting, firstly to stop us being washed over the waterfall, then to belay us down into the next pool. We dropped one by one in a great display of teamwork and met at the warming rocks at the bottom.

As the canyon began to widen, we knew our trip was coming to an end. We clambered over a few more rocks and back under the forest canopy to walk the final few kilometres back to the car park.

When we got back to the van, there was a flurry of wetsuit stripping and then we lay in the afternoon sun eating a well-deserved lunch, retelling tales of our adventure. By the time we got back to Queenstown, it was past 5pm. We had been on the go since 9am that morning and it was hard to believe that eight hours had passed so quickly.

When you see the images, canyoning can seem a little intimidating – cascading waterfalls, jumping off cliffs, plunging into icy water – but it is without a doubt an experience of a lifetime. That may seem very cliched, but it’s true. It really is the mixture of the place, the adrenaline and the fear that makes it utterly ‘unique’. 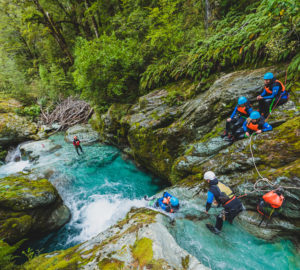 Canyoning – What’s not to love? Everything.