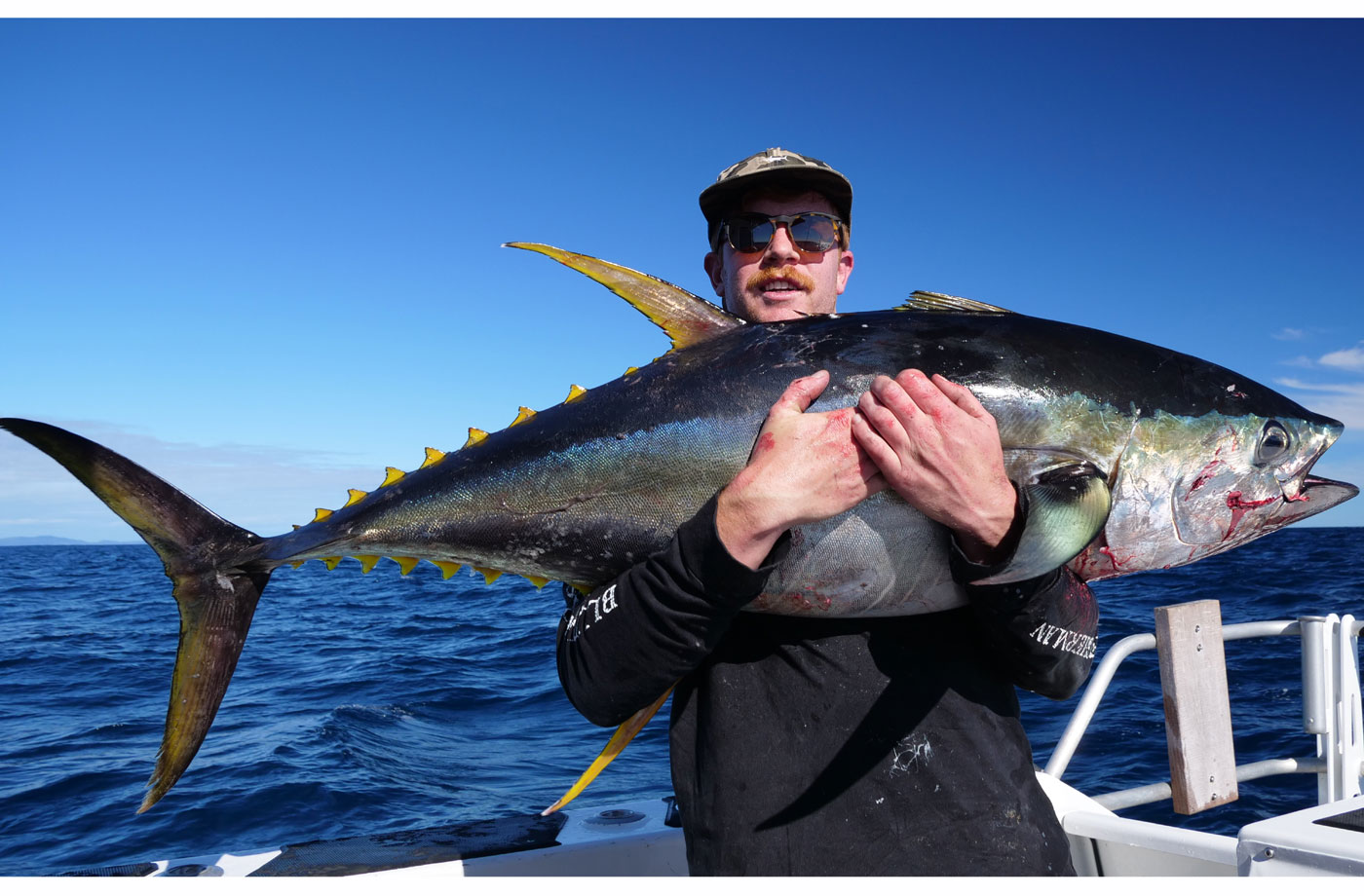 Catching a gamefish is one thing, but landing one on your own boat with your mates is another experience entirely. Charter captain Nick Jones shares a few tips for getting started with gamefishing.

With warmer than average water gracing New Zealand as a result of La Niña conditions, we have seen a great start to the summer gamefishing season off both the west and east coasts. Gamefishing can be an expensive and cruel mistress, but once that reel starts howling, it makes all the effort worthwhile. I don’t consider myself an experienced gamefisher, but I have certainly learnt a few things the hard way! So, here are a few tips for newbies.

Work out what you want to target

Our typical gamefishing season begins in December and runs through to about June. This is when anglers will head out from ports around the northern half of the North Island targeting striped marlin, blue marlin and yellowfin tuna. Nevertheless, other gamefish species are available during the ‘off- season’ – namely southern bluefin tuna which are primarily targeted in mid-winter off East Cape, and the deep-dwelling swordfish which can be caught during all seasons.

Gamefishing requires a fair more amount of kit and preparation than bread-and-butter fishing – the following are important considerations: 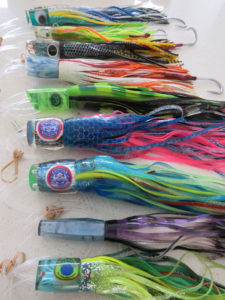 • Having sharp hooks is a crucial element, especially when your primary target comes adorned with a solid and awkwardly placed bill. If you’re rigging your lures or livebait rigs with heavier gauge hooks that aren’t chemically sharpened, then it pays to invest a decent amount of time filing the point and barb down for easier penetration.
• In terms of rigging, check out the wealth of online rigging tutorials or get an expert at a good fishing tackle store to do it for you.
• It pays to have good quality rods and reels spooled with 600m+ of 24kg or 37kg line. I lost the first marlin I hooked after an hour on an old Shimano TLD25 with 15kg line – and that one hurt! As they say, don’t bring a knife to a gunfight.
Livebaiting is a good option if you’re financially restricted – you can realistically fish with one or two quality sets (and burn a lot less fuel!). Ensure your equipment is regularly re-spooled so that your line does not go past its use by- date.
• It’s so easy to keep buying the latest shiny lure you see but in reality you only need a basic mix of head styles, sizes and colours to cover most bases. I like to err on the side of running smaller lures – you’ll have a better chance of hooking smaller species such as shortbill spearfish, mahimahi and tuna, yet still attract the big ones. 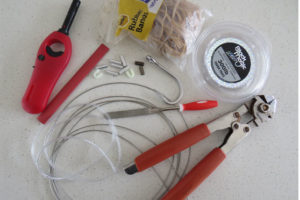 • If you’re going livebaiting, it’s likely you’ll need small tuna lures on rods or bungees for skippies, lures for kahawai, or sabikis for jack and slimey mackerel, and bait needles and thread/rubber bands for bridle rigging baits.
• Outriggers help reduce tangles, spread the lures and keep them visible in clear water away from engine wash. Although I cut my gamefishing teeth using surf rods lashed to the side of the boat as outriggers, getting a firm, crisp release from professionally made sets rather than a sloppy, stretch release from poor DIY versions will increase your hook-up ratios.
• Dredges are a great visual stimulant for gamefish as they imitate a small school of fish or squid.
• Rubber bands are handy for anything and everything during a gamefishing trip!
• Ensure you have an endgame plan with either a flying gaff or tag pole.
• Wind-on leaders are great for trailerboat fishing to clear lines quickly and help boat-side fish handling.
• A game chair or gimble belt and harness are mandatory.

The process of finding the fish starts before you head out on the water. Check out recent reports, which fishing club sponsor grids have been fruitful, talk to people who’ve been out recently and keep an eye on the sea-surface temperature, current and chlorophyll charts online.

Once you’re out there, it’s all about reading the signs. All signs of life are positive – be it birds on the water, gannets circling or diving, baitfish schools, dolphins, whales, sharks, or your target species cruising or feeding. If you see lots of baitfish on your sounder or spot marlin or tuna in a particular area, then it is advisable to stay in that area and
‘mow the lawns’ rather than ‘leave fish to find fish’. 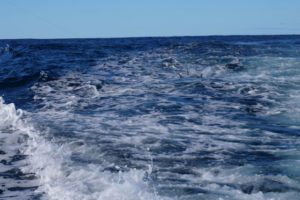 Current lines or mixing zones are an important place to find gamefish, particularly striped marlin. These areas can be distinguished by different surface conditions (rippling or smooth water), visible colour changes, temperature changes, and birds and baitfish holding in the area. Current lines tend to hold baitfish or squid and can be thought
of as a highway for gamefish and are a great area to target your efforts. Similarly, drop-offs, trenches and seamounts on the chart often create upwellings that kick-off the food chain and are worth checking out to see if fish are holding.

When trolling, most anglers fish four or five lures – a short corner, long corner, short rigger, long rigger and the fifth option is a shotgun. The short corner is generally set on the boat’s second pressure wave, with the other lures staggered on backward pressure waves on alternating sides with the shotgun the furthest back set in the middle of
the spread. Positioning lures on the bottom half of pressure waves mean lures are easy for fish to see and eat, and they will track smoothly and not skip. If lures are skipping, then try banding down the corner lures or lowering the outrigger height so they run from a lower point.

A general rule-of-thumb for drag settings is that ‘strike’ should be 1/3 of the line’s breaking strain if you’re using standard game hooks. You can use a set of scales to help set the drag correctly. Trolling speed depends on the conditions, current and lures, but generally between 7-9 knots is about right.

For livebaiting, most boats run one or two livies at a time. They can be set at different distances from the boat, from the outriggers, or one on the surface and one on a downrigger to provide some spacing. Common livebaits include skipjack tuna, kahawai, koheru, jack mackerel and slimey mackerel. The gear should be set with a light drag or with a decent slack line dropback in the outriggers to allow the fish to swallow the bait before the hook is set. 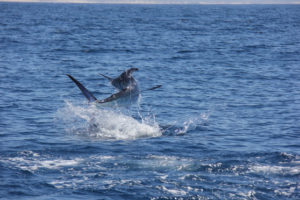 Once you’re lucky enough to be hooked up, remain calm. When trolling, keep the boat moving forward at trolling speed while you clear the gear – this helps set the hook home, provides line weight pressure to keep the hook in the fish, and also allows more chance for a double strike. Once the gear is clear and the angler harnessed in, you can then start to use the boat to run the fish down. Big tuna will tend to settle into big circles under the boat, while striped marlin generally stick on the surface. Blue marlin have a tendency to dive when they feel lots of pressure, so be smooth and steady and don’t be tempted to increase the drag unless you absolutely have to. Putting too much pressure on a big fish can sometimes lead to it heading to the depths in panic and it will be extremely hard to lift back up.
Good luck out there! 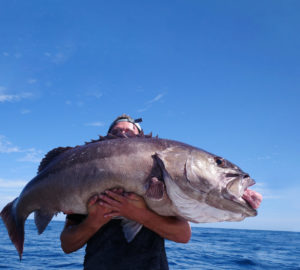 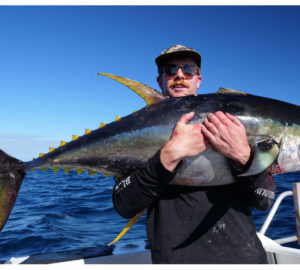 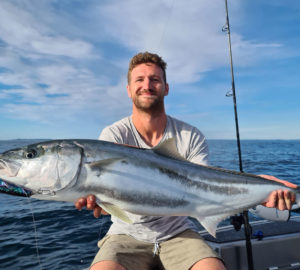