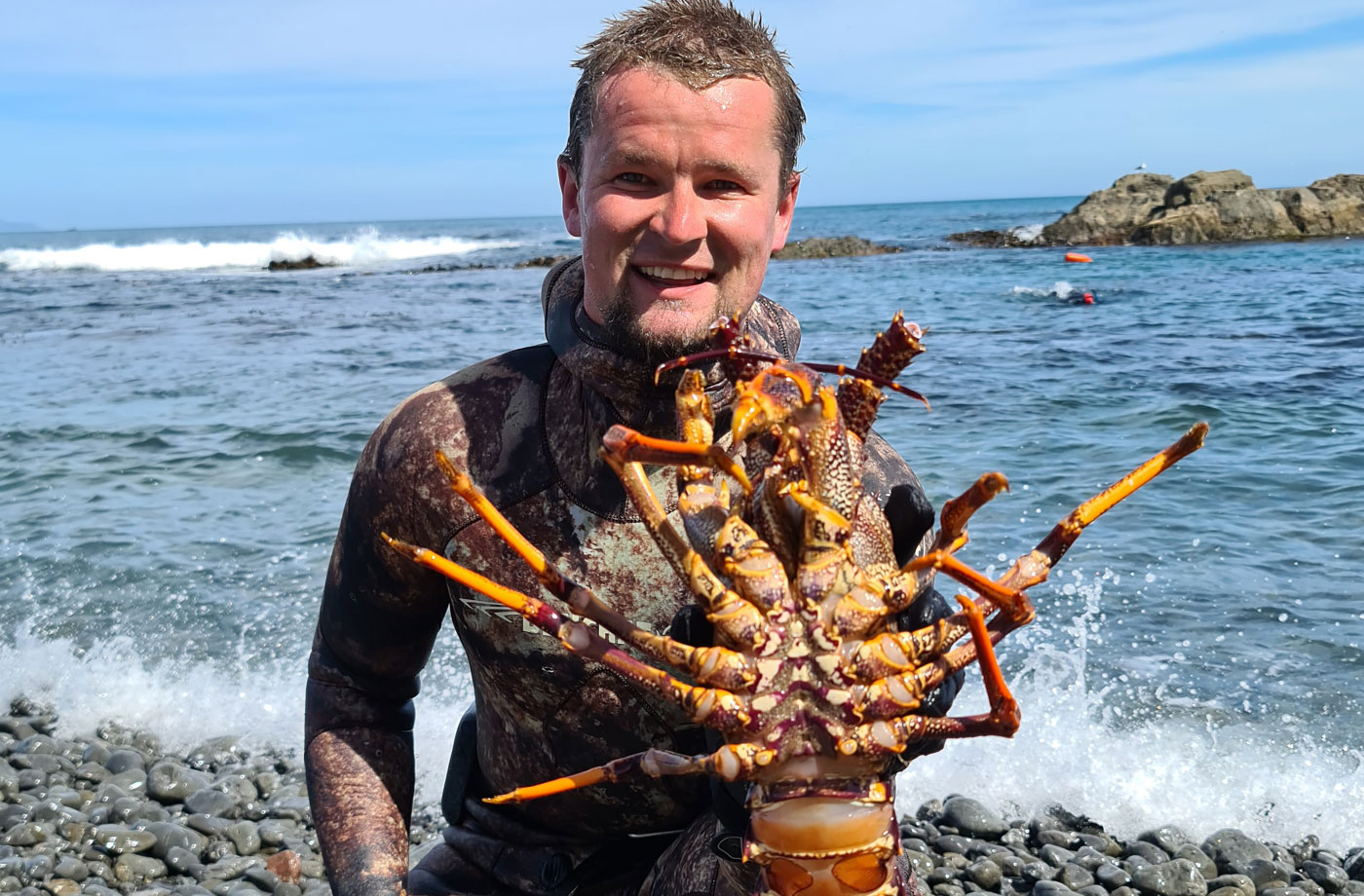 “Hinau”, Ethan tells me, is actually the name of a native tree. Once a year, hinau charitably drop their berries, and the pigs waste no time cleaning up the forest floor. When this happens, there’s only one place you’ll find Ethan: snooping around the hinau with his dogs and knife in tow. So when he set out building by himself two years ago and had to choose a business name, Hinau Construction was the undeniable winner – why not bring pig hunting to the workplace?
He’s now inundated with work, has a few sites on the go and is looking to bring an apprentice on board, but thankfully he still took some time out of his busy schedule to have a yarn with me – also Ethan – about his trade and how he fills his time off the site. 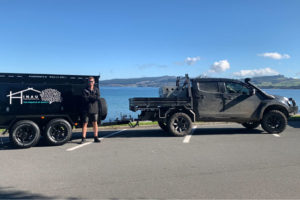 There was no umming and ahing for Ethan when it came to career choice – his mind was well and truly made up before school prizegiving.
“I started building two days after my last exam,” he tells me. “Jumped straight into a three month trial and then into my apprenticeship. I did that with a local Upper Hutt guy (Brendon from Build and Scape Ltd) and we built houses together. I was pretty lucky, he was really good to work for. We just got all the crap jobs done together.”

As someone who hates to sit still – something Ethan confirmed at least a couple of times in our conversation – building proved to be the perfect fit.
“I just like the idea of building and standing back at the end of day and looking at what you’ve done… It’s great when you’re driving around and mates say:
‘Did you build this?’ and I say, ‘Yep,” and they say, ‘Oh my god’.”

After four and a half years of working with Brendon, however, he thought it was time to give it a crack himself. Hinau Construction was born, which was a big jump for the then 22-year-old Ethan.
“I didn’t find the transition too bad. I went straight to an accountant and he talked me through it and made it real simple. Just go to work and don’t spend all your money,” he laughs.
“I thought I was going to have to be asking for work, but straight away there was heaps of work – which was awesome but a bit of a shock when you’re trying to learn how to run a business. I’m not very computer smart but it’s been really easy.”
But he was quick to remind me that owning his own business has come with some new challenges. In December last year, right in the middle of the Christmas rush, he broke his hand, forcing him to take a substantial break from work.

“That was quite an interesting eye opener as to what happens when you hurt yourself… I had to ring up and talk to everyone. Some people were like were ‘Na, we’ll get someone else’; other people waited; and some got abusive…” 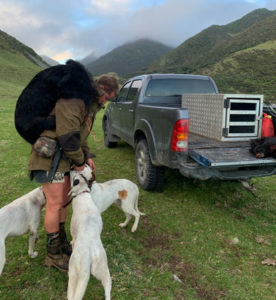 The advantages of working for himself far outweigh getting a bit of stick from his customers, however, and first among these benefits is being able to ask himself for leave when he wants go hunting or diving.
“In the winter, it’s pig hunting and in the summer, diving,” he tells me.

“For pig hunting, it’s mostly local in the Wairarapa, but we do trips down south once or twice a year. If you got a 100lb pig hunting around here, that would be a really good hunt. Down south, we can catch three or four that size in the morning.”

On one of these trips he and his crew were choppered into the bush behind Blenheim where there was “no reception, no nothing.” After they set up camp – no more than a couple of tents and a tarp – they went for a quick wander to check out the country. It wasn’t long before they saw a good boar, and eyeballed it at 150lbs.

“We quickly tried to put the dogs onto him but he was onto us. He sidled his way down into the river and up the other side and headed straight for a mob of goats which, unbeknown to us, had a couple of pigs close by.

As the big boy ran through the mob of goats and sent them running everywhere, he quickly snuck off and headed for the skyline while some smaller pigs that we assumed to be around the 70lbs mark scarpered off in all different directions. The two dogs in pursuit fell straight into the trap, lost the big boy and headed off after what we thought was one of the smaller pigs.” 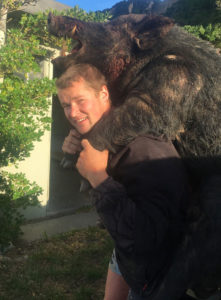 The dogs soon found their mark, and Ethan shot down to a river just below him. As soon as he had scrambled down the bank, he realised it was anything but a 70lb pig.

“This was a good black boar standing his ground. After reaching for the gun and realising I had no bullets to help the dogs out, I had to sneak around the back in the open somehow and get in to stick this big fellah in waist deep water.

“Once he was on the deck we had a quick check over the dogs to make sure no one was carrying any big injuries. A nice shoulder rip on one bitch but nothing that she wasn’t use to. With all the dogs happy and healthy and a good boar on deck, we started thinking about how big the pig that we initially tried to chase was if he made this pig look about half his size. We all smiled. Good on him.”

Ethan’s had no less success with freediving. On his first dive with a gun in his hand, he shot a five and a half kilo moki.
“It was the first fish I shot, so I had to ask my mate whether it was a good or not” – yep, he’s one of those guys.

Since then, he’s dived regularly around South Wairarapa and the Wellington Coast, with blue cod, tarakihi, moki, crayfish and paua all being on the menu. This mainly takes the form of shore-based diving. 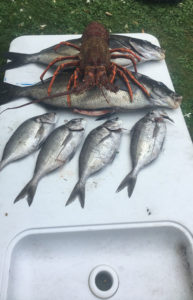 “That suits Wairarapa South and Wellington South as opposed to the west coast where you need a boat.”

Over the summer break he grabbed a solid cray in South Wairarapa. When I asked about whether he had hit up any festivals for New Years, he just laughed. He was up before light on New Year’s Day, fresh and ready to dive his local waters – and you can’t fault the results.

So what’s next for Ethan?
“My goal at the moment is to get myself into a house. Being 24 and self-employed, the banks don’t really want to give me money ha… other than that, I just want to grow my company so I’m not working till I’m 70.”
And with things tracking like they are, I’m sure he’ll be spending plenty more time around the hinau tree before long. 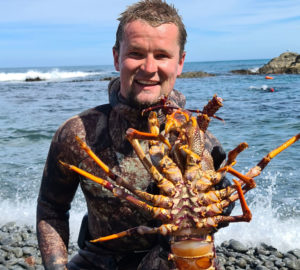 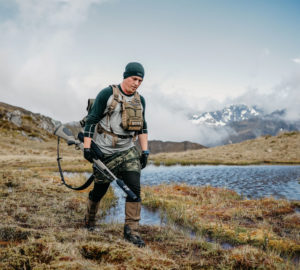 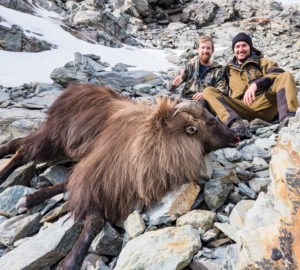