My journey with the Coast to Coast is not your usual one. For the last three years, my job has been to film the race, capturing the athletes, supporters and sponsors that make this event truly unique. There are a lot of logistics involved in covering a race like the Coast to Coast and invariably the pace of the event forces us to react and adapt as the action unfolds. The below is my experienced of this year’s race. 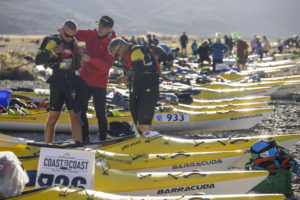 Hundreds of athletes packed Greymouth’s recreation centre. The air was filled with nervous energy – some athletes talking a little too much, others staring into space wondering what they’ve really signed up for. This year we dragged a dozen or so competitors at random into a side room to interview them about their reflections and motivations for the race. It’s often not till you pose such pointed questions on camera that people are able to fully articulate their thoughts. These would later be weaved into the race film.

After the registration and race briefing, it was down to the Monteith’s Brewery for the traditional media feed where we caught up with the flock of journos and cameramen that would be covering the race. Afterwards, we raced back to our motel to edit some of the footage we shot that day and set up for an after dark piece-to-camera with the elite athletes. 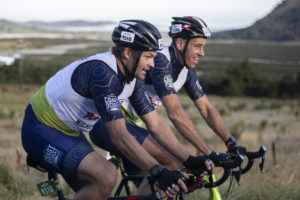 It was 5:45am and a 500m traffic jam leading into Kumara Junction had already formed. We flicked on our orange flashing light and drove up the side, hoping the impatient athletes and supporters could see our large OFFICIAL sticker on the windscreen. This was where our team split up. Our other videographer Danny, along with photographer Ian, headed to the beach to capture the start while photographer Pete and I sped to the Kumara township to capture the first bunch of cyclists. Once these were through, we hit the road which was closed for the next 40km. While Danny and Ian were tasked with capturing this cycle leg, Pete couldn’t resist and leant out the window to shoot some stills as I pulled alongside the main group.

Our job today was to get ahead of the pack and capture the mountain run stage. This starts with a mad dash across the Otira River. Most runners linked arms for this part to avoid being washed downstream. A safety kayaker watched on eagerly, hoping for some action. Once the first big group were through the river, we rushed to the helicopter which dropped us at various locations throughout Goat Pass. The first stop was a side creek with car sized boulders that the runners had to clamber over. The next was the Pass itself, a massive hanging saddle with stunning 360-degree alpine views. I was lucky enough to get some aerial shots of the runners with the drone, even capturing the helicopter from above after clearing it with the pilot.

Once we had what we needed, we jumped back in and flew to Klondyke corner, the final destination for the two-day athletes. I found Danny parked up in a DOC shelter furiously cutting the footage from the day for the highlights film, which was to be released in just a matter of hours. I dropped a couple of memory cards to him and picked up some final shots of the runners crossing the finish line. Almost 100km under their own steam. It was a massive effort. A mixture of elation, exhaustion and relief was written on their faces as they embraced their support crews. There would be more pain tomorrow with a solid kayak and cycle leg ahead of them, and I was heading back to Kumara to do it all over again.

For those on the start line, a daunting task lay ahead – going from one side of the country to the other in a single day. It was still dark as they set off which made filming tough. There was just a throng of bobbing headlamps roaring towards me. Our task today was to stick with the elite athletes as they battled it out at the front of the pack. These guys and girls chewed through the 55km cycle before we even saw the sun for the day. Their pace is astonishing and for us filming and photographing, there isn’t time to muck around. Along with the usual stops in the mountain run, we were able to capture some great images from the air by opening the doors of the helicopter and tracking the ant-like runners as they clambered up the river. 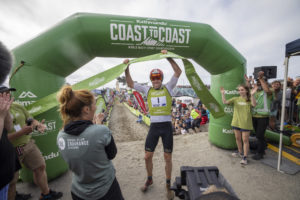 Once we landed at Klondyke, we jumped in the ute and sped to the Mt White Bridge to shoot the start of the 67km paddle stage. This is arguably the most gruelling stage with some paddlers spending up to seven hours on the river. After the paddle, the competitors face a 70km cycle to Christchurch with severely waning energy levels. The atmosphere at the New Brighton finish line was fizzing as the race leaders approached. With a couple of minutes to go, the media packed the finish line, jockeying for a clear shot down the finish chute.

It was Wanaka’s Dougal Allan that crossed the line first this year, followed closely by Sam Manson who got passed on the final cycle after leading all day. The female category got taken out by German-born Simone Maier who had also won in 2019. While each of these were amazing efforts, a standout was third-placed Ryan Kiesanowski, who completed the course with a broken toe. After a couple of post-match interviews, our team wrapped for another year. Filming the Coast to Coast gives you a privileged front row seat which few others get. I always look forward to it and even more so in 2022 as the event marks its 40-year-anniversary. 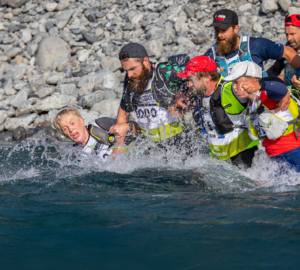