Rheem and motorsport go hand in hand. In America, IndyCar and NASCAR are at the centre of the racing landscape, and Rheem have partnered with up and comer Christopher Bell for the 2020 NASCAR season. With 16 wins already under his belt in the NASCAR Xfinity series, his new Rheem Camry has put him in a strong position to win 2020 Rookie of the Year.

In NZ and Australia, however, V8 Supercars are the highest priority, and Rheem proudly sponsor DJR Team Penske – but you might know them better as the team Kiwi Scott McLaughlin drives for.

It should come as no surprise then that there are a few motorheads in Rheem’s very own ranks. First among them is Auckland-based Andrew Edmonson, Rheem NZ’s Pricing and Commerical Manager. From pumping fuel into IndyCars to now travelling with his kart-crazy nine-year-old son, Andrew’s passion for motorsport has been one of the driving forces of his life (and we don’t apologise for that pun).

It all began for Andrew when his car-loving parents started dragging him along to motorsport events. They were members of the distinguished MG Car Club, and Andrew was in no way immune to their passion for motorsport. Before long, watching turned to racing, and he started to take part in hill-climbing events. While Andrew saw this as more of a hobby than a career, his brother had different ideas. In the late 90s, he landed a gig as a suspension design engineer for Chip Ganassi Racing. For those unfamiliar with motorsport, Chip Ganassi are an extremely successful IndyCar team, so when his brother reached out to him about a job opportunity, Andrew’s answer was a resounding yes.

This opportunity took the form of ‘fuel guy’ – or as Andrew likes to put it, ‘Petroleum Transfer Technician.’ In summer 1998, Andrew hopped on a plane and made his way to the States to join the team. For a young Kiwi petrol-head who wanted to see America, this was pretty much the dream job.

“I travelled with the transporter, so I’d go with the car and travel from track to track and help them set up everything for winter testing.

“My role as the fuel guy was to ensure the car was the same every time it went on the track – to maintain the same weight and amount fuel in the car every time it left the pits.”

This involved weighing the cars every time one came in, and filling it to just the right amount – perhaps not the flashiest job in IndyCar racing, but when you’re surrounded by high-level pit crews and travelling around America with some of the most well-known IndyCar drivers of the time, there’s not too much to complain about.

After a full winter with Chip Ganassi Racing, Andrew decided to his pursue his other passion: skiing. He took off to Austria with a small group of Kiwis to get trained as a professional instructor, which also involved a fair bit of racing. It is safe to conclude that Andrew has a penchant for speed.

When the time for travel was over, his attention turned to raising a family and building a career in NZ – but at no point has this diminished his love for motorsport. His now nine-year-old son William has grown up racing Karts and currently drives for a team called NZED Motorsport. William’s mechanic is, of course, Andrew, and they travel around the North Island racing most weekends.

“It’s a fantastic sport,” Andrew tells me, “and it’s really great bonding for us too, as we spend a lot of time together and work together as a team.” 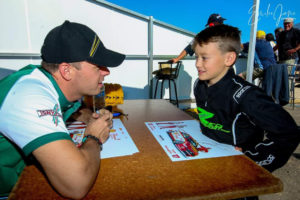 However, with his son burning through a set of tyres every few race days, it’s not cheap. They’re on the lookout for a sponsor, and with almost every F1 driver having started their careers in Karting, it might not be a bad investment.

And just in case you think Andrew has completely given up driving himself, his 1972 Datsun 1600 race car parked in his garage might tell you different!